At an uptown New York party in the early 90s, I met, well, the lyricist of this morning’s song – Robert Harris, though he introduced himself as Bob.

Setting the scene: this wasn’t my party “home base,” i.e. a music and / or comic book business party, which makes the chance meet all the more memorable. I was among my (first) wife’s people, from advertising and real estate, mostly. I think you know when I mean when I say “uptown.” Billy Joel sang a song about it before you were born. My gig: be a good, hopefully not too downtown arm accessory for my (then) wife. (You men know the steps: shave, look decent, don’t bite the hostess, don’t bang on the piano, make small talk, hold my lipstick and shoes…)

So, I was not expecting to talk about, much less sing about… everybody’s friendly neighborhood Spider-Man.

No one put me next to Bob – no one “filed” us by type or occupation. We mingled into each other by chance. Besides, outside my (that was a practice shot!) wife’s family, no one had an idea that I created characters and stories for comics. I wouldn’t begin scripting Marvel Comics for another year or so, but Faust: Love of the Damned, both the book and the first production of the feature film, and Nightvision were well under way, as were my contracts for DC’s Piranha Press books.

Holding my comic book freak card close to the chest was always sort of private game in those days. Most civilians didn’t even know comic books still existed. Everyone knows that comics source summer movies today, but at that time, they had only Tim Burton/Danny Elfman’s quirky Batman to go by…  unless they remembered Adam West and Eartha Kitt.

Now I’ve always believed that listening – and talking, but especially listening – to all kinds of people is an important part of the writer’s toolkit. This uptown crowd tended to assume, like most people, that if I looked and talked a bit like them, I was like them. I was a writer. Therefore, I must be a advertising copywriter. (And later, as the work-for-hire comics industry imploded, I found rewarding business in that field.)

No one ever expected me to mention that I created characters and wrote stories for comic books. It was always a fun game to wait till the conversation waned, drop it in there, and watch the amusement and confusion:

“Comic books? They still make those?”

“You draw comics in the newspaper.”

“They have writers for that? I thought that was done by computers now.” (I swear I’m not making this up.)

“Is there money in that?”

“If people like your stories, you deliver on time and you’re not an asshole.  Or any two out of three. That’s a well-kept trade secret, by the way. It dates back to the Sumerian comics industry.”

So went the game. Hey, I am not above cheap thrills. Until this night, this uptown party my (Mulligan) wife brought me to, when, instead of the usual baffled civilian response, the man I was talking to, Robert Harris, smiled:

“Comic books? Hey, I wrote a song for a comic book TV show once. Ever hear of Spider-Man?”

Did I ever hear of Spider-Man?

We only sang that song every Saturday morning!

“Spider-Man, Spider-Man,
Does whatever a spider can.”

Music to climb fences and jump out of trees by!

“Spins a web, any size,
Catches thieves just like flies.”

I can still can hear that song!

“Look out! Here comes the Spider-Man.”

Don’t pretend you don’t hear it when you think of Lee and Ditko’s webslinger!

I even see the words “IN COLOR” indelibly splash across the Manhattan skyline to the brassy blast that kicks the theme off!

Chances are, I don’t have to tell you what comes next. I’ve forgotten most of the classical Latin and trigonometry I learned as a teenager, but I can still sing:

“Is he strong? Listen bud—
He’s got radioactive blood.
Can he swing from a thread?
Take a look overhead.
Hey there! There goes the Spider-Man.”

So, instead of party question game, I got a chance to toast one of the guys who provided a theme to kindergarten recess! And thank him for it.

At the time, around 1965 or 1966, I’m sure Robert Harris thought of Spider-Man as just another job. Work for hire. And knowing animation, it was probably not his best payday. Working in New York at that time, I’m sure he contributed to both theater and advertising for better reward.

Robert Harris is also credited with writing the theme for Lolita. Perhaps he thought that a more prestigious assignment.

But there’s something indelible about this simple song. Like the show’s moodier background themes and over-the-top scene stingers, it’s dynamic, dramatic and just a little… eccentric. To describe it to someone that never heard it, I’d call it a kluge of show tune melody, surfer beat rhythm and advertising jingle chorus.

But I’ve saved the best for last. One line makes the song for me, and I was pleased I was able to tell my best friend for five minutes, Bob. Some of you know the line I am talking about:

“Wealth and fame, he’s ignored—
Action is his reward.”

You have to agree, that’s character core. It’s the flip side, the night ride side, the wild side of “With great power comes great responsibility,” a defining line for what makes Spidey’s stories work after all these years. Even work for hire assignments have their transcendent moments.

Okay, so I really geeked out here, didn’t I? My good friend Kim at Harvard will probably not share this essay to students, as she did my “new literacy” musings.

But if I were Spider-Man, and my life was a great big bang-up, wherever there’s a hang-up, this would be my song!

“Spider-Man,” theme of the 1967 cartoon show was composed by Paul Francis Webster and Robert “Bob” Harris.

But wait, here’s more – this week’s hymn handled nimbly by the godfathers of punk, The Ramones! 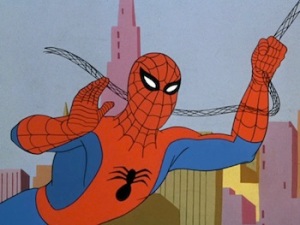